I aim to write many pruning treatments in this blog. Others to follow will focus on situations and strategies conducive to maximizing or optimizing fruit production. The strategies discussed in this particular post however involve stimulating new vegetative growth that doesn’t produce fruit in most cases. Coppicing and pollarding are essentially aggressive forms of “topping” woody plants. They may be considered types of renovation or “hard” pruning. Although risky, topping can be useful for controlling height and forcing production of new shoots. Working at Raintree has enlightened me to many pruning techniques, including coppicing (cutting back to the base or stump) and pollarding (cutting back to a certain height above the ground). Both methods can provide endlessly renewable wood. In Europe, people have sustainably coppiced and pollarded the same plants for hundred of years, providing continuous habitat for wildlife and resources for humans. In urban settings where street, power lines, and building may limit space, pollarding can maintain trees that otherwise would grow too large. 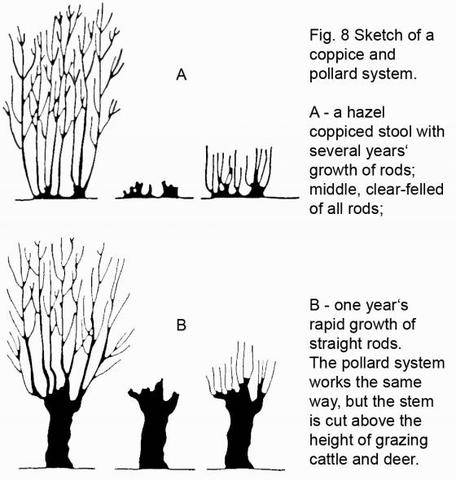 Coppicing is the periodic (on multi-year timescales, depending on the species) cutting back of suitable species back to their base. Many woody plant species (shrubs and trees) will resprout from the stump (termed epicormic regeneration, with dormant buds sprouting from underneath the bark), or from roots (suckering) after being cut down. This is an ancient method of sustainably managing forests in Europe that provided many economic and wildlife and ecosystem benefits. Coppiced hardwoods, including alder, beech, hazelnut, sycamore, and willow, can perpetually provide firewood and crafting and building materials without having to be replanted. Hardwoods that don't "bleed" too much from pruning are ideally suited for coppicing (or pollarding for that matter). Maples, for instance, tend to bleed a lot when cut. Most conifers do not resprout after being cut back to the stump. A notable exception is the coast redwood (Sequioa sempervirens). In fact, I should restate that: Most conifers do not resprout from the stump though many conifers do, in fact, exhibit this to some degree (<https://www.conifers.org/topics/vegetative.php>). People have been coppicing on multi-year timeframes for such a long time in some European woodlands that they have created a disturbance pattern of shaded and open areas that benefit many rare plants and animals. For various economic reasons (including cheap fossil fuel energy that is changing the climate), coppicing largely died out in Europe in the 20th Century, but has seen renewal in recent decades out of conservation concern. Coppicing never developed as a disturbance regime on the frontier landscape of North America, where I imagine less human population density and supply exceeding demand have historically allowed more squandering of wood products. In the West and Southeast in particular, vast coniferous forests are sustained through clear-cutting and replanting. The home orchardist reading this may have the opportunity to manage a small woodlot through coppicing. In the realm of fruit and nut orchards, scionwood production for grafting may be stimulated through the cutting down of an unhealthy tree that is deemed unsalvageable through more balanced pruning. If not on rootstock, then many fruit and nut trees may be cut back to the stump and allowed to resprout. This actually could be an appropriate option for “resetting” the wild growth of plums and figs, for a couple examples. Hazelnuts actually benefit from being coppiced every ten years or so, though of course that means waiting a few years after cutting for any nut production. Hazelnut wood can be used for crafting many things that the homesteading inclined mind may find useful and economical (especially within an environmentally sound framework transcendent of the climate changing realities of consumptive modern life). Some items that can be made from hazelwood are hurdles, beanpoles, staffs and walking sticks, charcoal, wattle and daub, tool handles, fence posts, stick chairs, and more. In addition to hazelnuts, Raintree offers many other plants that could be appropriate for coppicing, including figs, mulberries, some of the fruit tree rootstocks, goji berries, goumi berries, aronia and serviceberries.

As with all pruning, one of the keys to understanding coppicing and pollarding is apical dominance. To a greater or lesser extent in plants (and definitely greater with shrubs and especially trees) the top bud (apical meristem) exerts hormonal dominance over lateral buds (which, in a tree, can form branches). Removing the uppermost bud on the leader (top of a tree) by “heading back” releases lateral buds from this dominance.

Pollarding involves making an initial heading cut on the leader to enforce a reduced height and then keeping lateral branches to a reduced length from the top and cutting them off six feet or so up the trunk. Pollarding can be used to bring an overgrown tree back to desirable height (e.g. within ladder’s reach). It can also be handy for maintaining trees in tight situations. Pollarding over many years will result in a tree with fat knuckles and a distinctive look that needs to be pruned regularly to stay that way. This is not recommended for maintaining a balanced fruit tree. Some pollarding in the first few years, followed by new pruning strategies down the road (such as selecting for a new central leader) could help regain control of an overgrown fruit tree. I must say that in general, thinning cuts, which remove branches cleanly at the branch collar, are recommended over heading cuts when pruning fruit trees. Even with pollarding, thinning cuts are better than heading cuts, if possible.This is because heading cuts don’t heal as well as thinning cuts and can be entry points for disease-causing organisms. 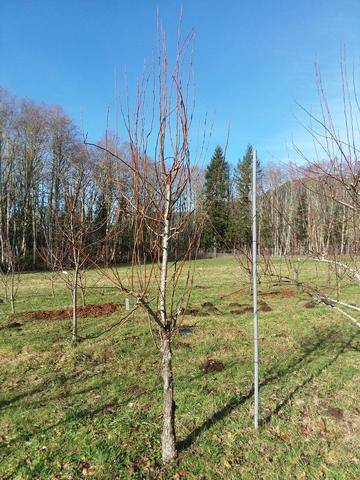 A pollarded pear tree: This tree is on its way to being a compact pollarded tree that will produce lots of scionwood with straightforward, but regular pruning. 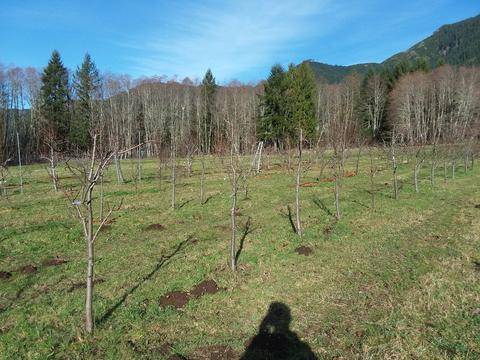 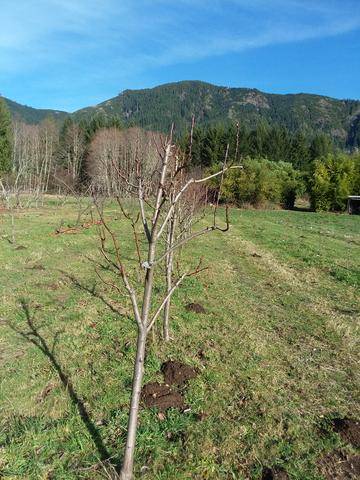 A row of trees in Raintree's scionwood orchard that are on dwarfing rootstocks and I began pollarding in winter of 2018-2019. Pollarding is best done in the dormant season.

Pollarding is useful for forcing scionwood production and simplifying management. All the side branches a certain length up the trunk can be removed for ease of mulching, weeding, and scything or weed wacking. The height can be kept down and sprouting from truncated lateral branches forming the rounded crown can be maximized for scionwood.

I wanted here only to introduce the reader to the ideas of coppicing and pollarding for some inspiration and food for thought. I wouldn’t recommend running out to cut down or cut back a valuable and well managed fruit tree, but an overgrown hazelnut? It might benefit from such extreme treatment. In future blogs, I will address other pruning strategies, such as central leader versus open center in establishing a fruit tree, espalier and other space-limited strategies using cordons, and restoring decadent old fruit trees. I would also like to address other aspects of pruning that I think about in my work at Raintree, such as pruning for fruit versus growth and the timing of pruning. Stay tuned for more blog posts on pruning!