Working on Water Lines Ahead of the Dry Season

What that means for the most part in the Pacific Northwest is that many months of no rain will start soon. The place might be called Raintree Nursery and, yes, it lies on the western slopes of the cloud-catching Washington Cascades, but the climate is Mediterranean in terms of the summer drought. I grew up in the Oregon Coast Range and July and August were almost always dry. At Raintree, September and October can be fairly dry, too. May and June seem like playful, fickle months that can have rain showers and heat in the same day. The grass grows fast during this time. So does everything else for that matter! Timely work in May and June includes preparing for and starting summer irrigation.

We choose to irrigate our orchards at Raintree for several reasons. We grow fruit for public events and employees' enjoyment. Summertime irrigation boosts fruit production from even established trees. It helps ensure survival and establishment of young trees. Irrigation also helps maintain abundant scionwood for next winter's grafting.

At home, I have an orchard of a different style. I mulch and compost heavily with all manner of great organic matter. I have a clay subsoil that retains water well. My irrigation needs are much lower than Raintree's, where, for one thing, the soil is quite well-drained. Of course, it should be noted that there are large, well-established, standard-size apple trees growing at Raintree that receive no irrigation and do pretty well.

To prepare for irrigating, I have been checking water lines and the stand pipes that distribute water to them. We use drip irrigation with little emitters that let water drip out  slowly in certain places. Earlier in the spring I moved emitters farther away from mature trees to make their "feet" less wet. I moved emitters closer to those trees' drip lines, or just beyond where the roots grow, searching for nutrients. I put emitters right beside newly planted tree. Lacking well-developed root systems, they definitely need that water to grow and survive in their early years.

Some of our irrigation is hung up on stakes, running down the rows of trees. Having plenty of room below the irrigation line helps make weed wacking and other grass management easier. I also worked on re-staking the irrigation line where it had fallen down. This involved wrapping a lot of smooth wire onto metal stakes, poking holes in two pairs of gloves, and a minimum of bleeding! It was well worth it. Now, the lines can be checked and repairs made much more easily.

The elements--winter freezing and thawing, ultraviolet radiation, the sheer power of water, and so much more--finally broke some elements in standpipes that distribute well water to the irrigation lines. I have been practicing my very basic plumbing skills replacing broken pipes and fittings on two standpipes. 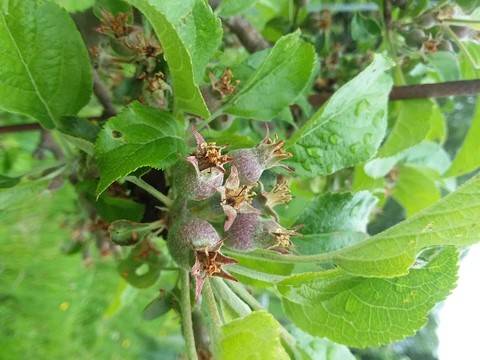 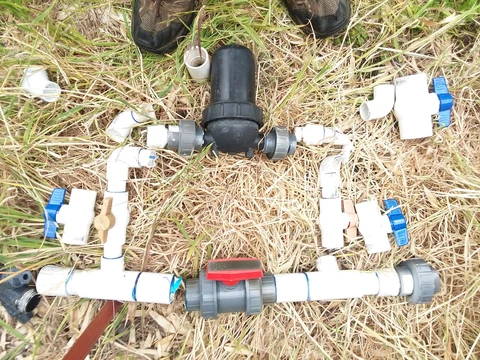 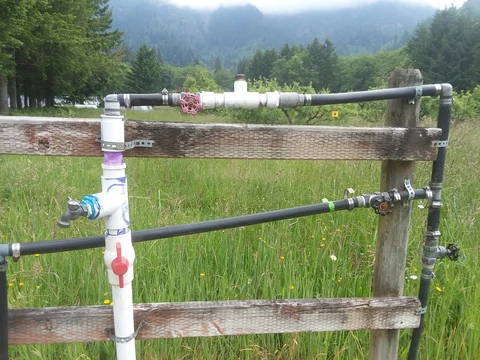 The advice I can give from my limited experience working on plumbing and irrigation puzzles at home and at work at Raintree? Take lots of photos! Before, after, and along the way. Take notes on parts. Measure parts! Draw a diagram if need be. Finding the right tools for the job is obviously important. For me, those have included screw drivers and wrenches, a hammer and nails for repairing the stands holding pipes up, a hacksaw for cutting pipe, pipe thread for threaded connections, and PVC primer and cement for slip connections.

I don't know much about all of this. I'm still learning and getting satisfaction out of solving little puzzles. It would be ideal if it rained year-round here and irrigation weren't a problem. Heck, it would be ideal if it only rained at night, like in legendary Camelot! However, it doesn't and yet we do enjoy those lovely, dry Northwest summers. Fruit trees just might need some mulching and extra water, especially the young ones.